One of the activities Michelle asked us to do was to make a quick diagram of a community we belong to. I chose a group of people who make art together on Saturdays. One of them, Fred, has been making big public art with me for more than twenty years. Another, Fab, has been making big public art with me and Fred for more than ten years. One came along as a friend of Fred’s when they became a couple a few years ago. Another joined a few months ago with her daughter. So I started labeling the strength of the ties in terms of years of shared experience.

This is a close-up of a group who are tightly knit — we all know each other. What this sketch does not show is how loosely bounded we are — we each have connections to other groups and networks. Every Saturday, someone from one of our networks shows up, so there is a cloud of more ephemeral relationships that is also not pictured.

If you include both the stronger and the weaker-tie relationships each of us have to people in other than those in our group, then it begins to look more like a small-world network. Because of a relatively small portion of random distant ties outside the immediate group, it becomes possible to get from any person in the network to any other person in a small number of hops. In the case of the human population of the earth, the number of hops is six: 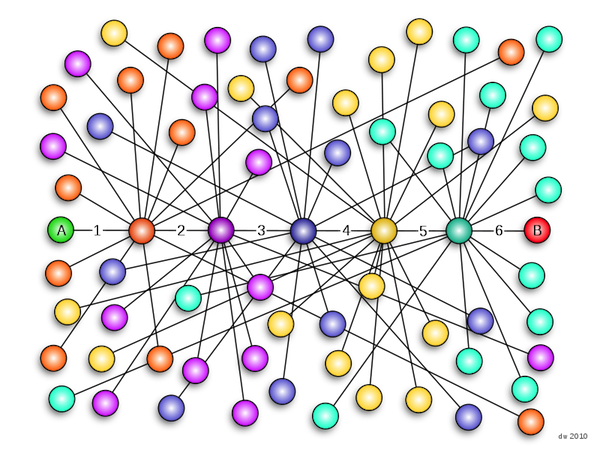 So I live in a world that includes sparsely knit and loosely bound networks and densely knit and tightly bound groups and communities.

In regard to the way media gives new powers and takes away old ones, McLuhan’s Laws of Media is often a useful thinking tool.

I’d love to learn more about these apps and how to use them, either as a learner lecture or a collaborative project. Have you used Hangout? I also use a more powerful multi-user audio-video-text-graphic platform called Big Blue Button.

Depending on how far you want to dig into it, Gabriel, you can find discussions about how spoken language, the written word, the printing press have co-evolved with the way people think and communicate. Some valuable aspects of old media are lost and other value is gained, and until very recently in a process that you could stretch back for a hundred thousand years, I don’t think very many people thought about and debated what we are gaining and losing. Probably the most famous early commentary was Socrates, who said this (among other things) about the alphabet: “For this invention will produce forgetfulness in the minds of those who learn to use it, because they will not practice their memory. Their trust in writing, produced by external characters which are no part of themselves, will discourage the use of their own memory within them. You have invented an elixir not of memory, but of reminding; and you offer your pupils the appearance of wisdom, not true wisdom, for they will read many things without instruction and will therefore seem to know many things, when they are for the most part ignorant and hard to get along with, since they are not wise, but only appear wise.”

This is Michelle, right? If you click around (or search for the solution) you can change the name attached to your posts from “Admin” to your name (I did that myself, last week).

You are exploring a big issue. Go with your exploration in the awareness that we’re going to take this up when we spend a week reading, then a week talking about “Identity and Presentation of Self.” I could suggest a lot — look in the recommended readings for that session — but an ancient master’s thesis (2001!) is still a good place to start: FACETED ID/ENTITY: Managing representation in a digital world by danah boyd. I mentioned “context collapse” in class — one force that social media has enabled and which strongly influences some of our social presentation. This idea of curated self-representation you raise is as deep as it is relevant. We’ll talk about the work of Erving Goffman, which precedes the Internet, and many social scientists have been approaching these questions from different angles. I’m interested in your reflections, Michelle, because obviously this is something that you’ve been thinking about.

In regard to maintaining relationships, before online social network services, most people had strong ties and weak ties, but with the advent of Facebook, the “latent tie” suddenly became more important. If you want to look into that, this research report might be informative.

As your lead co-learner, one of the balances I seek to strike is a balance between giving you all the tools you need for our inquiry and overwhelming you with info. I suspect that if I asked for a call of hands, people would think I’ve come closer to the “overwhelming with info” part. However, since there seems to be a bit of fuzziness around mindmaps versus concept maps, the very short explanation is that a mindmap is more hierarchical and only labels nodes; concept maps are more network-like and label edges (connections between noses) as well as nodes. Here is a guide that I worked up awhile back around mindmaps and concept maps.

Source: The Theory Underlying Concept Maps and How to Construct Them

Luke, you are correct that co-learning presents a great potential for you to delve into social media issues that most concern you. I use the word “potential,” however, because much depends on how far you and your co-learners are willing to go in steering the course. I’ve provided a syllabus with a list of texts we should all read each week (and lists of texts that are not required, but which provide more depth, should you desire to dive more deeply into one of our subject areas). There is plenty of room to raise issues that I don’t directly raise via your blog and our forum. I can encourage, facilitate, and seed conversations, but only you, the co-learners can make them happen.

What a thoughtful and nuanced post, Mia! I’ll do my best to facilitate the kind of experience you are looking forward to. In regard to “Finally, a thought on the role of social media: Although we can clearly define platforms and examples of social media in our day to day lives, social media’s full impact on society is not easy to understand and the roles that social media plays are numerous.” I have to reinforce your statement. So many generalizations about social media fail to encompass context — is it a disabled person or a terrorist that we’re talking about? What is the relationship between that person’s media use and their physical activities? What is the relationship between their intention and our reading? These are just a few of the questions that come to mind when trying to evaluate the individual or societal effect of some social media behavior. As I mentioned in the first class meeting, I don’t think it’s useful to strive for definite answers here; rather, we should seek to gain perspectives, vocabulary, disciplinary tools for viewing and evaluating social media issues.